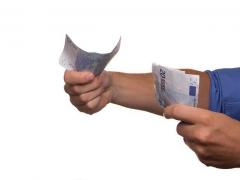 They say you can never be too thin or too rich and that may be true, but there for sure is such a thing as too much commercial exposure. At least that has been the case vis-à-vis the NCAA Men’s Basketball Tournament. They have been making fans watch the “same series of commercials every weekend” for the last month. They have to realize at some point that this is plain boring.

So why are they doing it? Well, it’s all about the cash at the end of the day. Apparently it makes good dollars and “sense.” Sponsors and networks are reaping in the dough since millions of (probably somewhat bored) viewers are being exposed to this.

There’s mad and then there’s mad. And it’s total madness for sports fans to be interrupted hundreds upon hundreds of times with the same commercial of “M-class’ forest-breeze air conditioning, silver-dust polished wood trim and hybrid technology, they’re only doing it because they care — about getting fans to plunk down $50,000 on a car.”

What happened to NIKE during this whole tournament? It seems not but if you just take a look around you’ll see most of March Madness just being a Nike commercial. Indeed, 51 of the 68 schools in the tournament field wear Nike or its subsidiary Jordan brand jerseys. As well, 14 out of the tournament’s 16 are wearing the Nike logo on their shirts. So it makes sense that the company enjoyed income increases for the fiscal 2011 third quarter but its stock plummeted since it “missed estimates amid concerns over increased margin pressures.”

There’s sales and then there are sales. Sometimes it can be overkill and it simply isn’t as effective. That’s clearly what’s been happening with the NCAA Men’s Basketball Tournament. Perhaps it should take this lesson and learn from it.