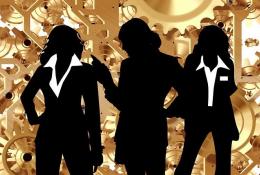 With a degree in Tourism Management from Ouhua College, Luo Zilin began her professional modeling career in 2003. She has worked for well-known brands such as Chanel, Louis Vuitton, UPS, and Qingdao Beer. As well as being the 2011 winner of Miss Universe China, Zilin has over the years, tried to use her talents to “build the bridge between China and the rest of the world, giving people who are interested the opportunity to get to know the real China.”

Luo Zilin is not the only one who has been using her modeling career to help China’s reputation as a entity. Yue-Sai Kan, the Chinese American Emmy award-winning TV host and producer, entrepreneur, author, and fashion icon (often referred to as the “Oprah of China”) has also been assisting with this goal. Indeed, according to Luo Zilin, it was Kan who “let more people know about beauty and pageants, and encouraged women to use their beauty as a source of power.”

On Wednesday October 22, Tribute Awards for Points of Light is to be held at the Embassy of the People’s Republic of China, in Washington DC. One of the honorary co-chairs is Yue-Sai Kan. At the event various individuals will be receiving tribute awards for their philanthropic work. Among the award recipients are: Hewlett Packard (for its employee volunteer program that seeks to find solutions to various social problems), Charles Orgbon III (for his Greening Forward initiative), and World Central Kitchen (humanitarian organization that feeds the hungry).

Yue-Sai Kan has over the years, hosted key diplomatic officials from both America and China, as well as entrepreneurs including Richard Gelfond, President of IMAX. With her business flare and philanthropic commitment, it is individuals like her and Luo Zilin who can make strides in helping China’s global reputation.

Points of Light is the largest organization in the world that is dedicated to volunteer service.