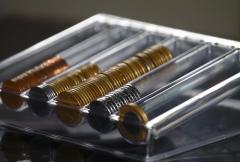 The Federal Reserve’s announcement that it would maintain interest rates very low for at least two years indicates that the Fed expects a real recession of at least a year.

Meanwhile concerns about the global economy cut off Europe’s stock market rally and has not stopped the Wall Street decline as of this morning. In Germany, the DAX fell 1 percent to 5854 while the English FTSE 100 index of top English shares fell by .7 percent to 5124. France’s CAC-40 dropped by 1.9 percent to 1153.

Another sign rocked the financial community when the U.S. Government released a report that the U.S. economy grew much less than expected during the first half of 2011. This indicates a significantly greater chance of recession.

Another major market worry is the European Debt Crisis. Italy and Spain may well need bailouts and investors have ceased to purchase their bonds. The ECB (European Central Bank) has begun buying these countries’ bonds worth billions of Euros. This action has helped alleviate the high yields on Italian and Spanish bonds which dropped to approximately 5%.

What we see is an across the board fall, in not only the American stock markets, but also across the European markets. This is consistent with a worldwide recession starting in American and Europe and spreading to Asia and the Middle East.