According to the most recent Wells Fargo/Gallup Small Business Index, optimism among small business in the US is higher than it’s been at any time since 2008. The November overall Index score topped at 58, flying past July’s score of 49. The last time this number was so high was during the first quarter of 2008, when it peaked at 83. In spite of the positive trend, there is still a while to go to get to the pre-recession levels. 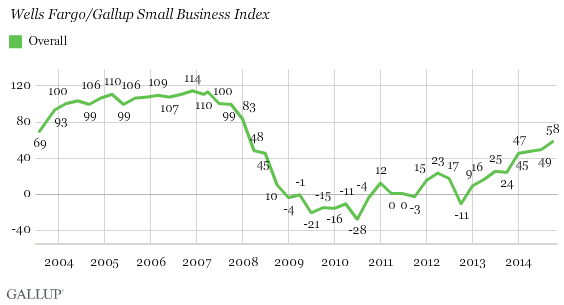 The data for the Index number was collected between November 10 and 14 from small business owners across the country. The highest this Index has ever been was 114, which was reached near the end of 2006. During the third quarter of 2010 the Index reached its all-time low of -28.

The upward movement is a reflection of the optimism small-business owners feel about the improving economic situation in the US.