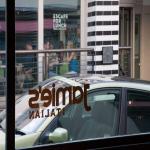 It’s always interesting from a business vantage point to follow major changes that business leaders make. Jamie Geller, for instance, celebrity chef and founder of the Kosher Media Network and the “Joy of Kosher” cooking series, recently changed her entire life.  She and her family, with the help of Nefesh B’Nefesh, made Aliyah this summer and moved to Ramat Bet Shemesh, Israel.

She has released a documentary series which looks a bit like a reality TV style show entitled “Joy of Aliyah” which shows their transition. The series, assisted by Nefesh B’Nefesh, The Israeli Ministry of Immigrant Absorption and the Jewish Agency for Israel, promotes Geller professionally as it shows an interesting glimpse into the changes a family goes through when making a monumental decision of this sort.

Prior to becoming a famous cookbook author, Geller actually wrote and produced television shows. She was a writer and producer for CNN, Entertainment News, the Food Network and HBO. She worked on the groundbreaking original series The Sopranos and also worked on The Wire, Entourage and more. In 2007, Geller published Quick and Kosher Recipes from the Bride Who Knew Nothing. In 2010, she published Quick & Kosher: Meals in Minutes and in 2013 she is set to publish a third cookbook.

She has also co-founded the Kosher Media Network and launched the Joy of Kosher with Jamie Geller, a magazine and companion website at JoyofKosher.com.